WE WILL REMEMBER THEM 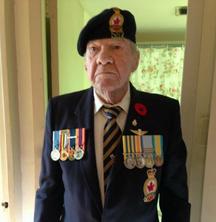 In his 22nd year, Vern returned to Nova Scotia after living in Ontario for 3 years and joined the Canadian Army on Dec 19, 1951.

He spent 2 ½ yrs in Korea in the artillery/parachute regiment and was discharged on Dec 25, 1954.

Vern returned to Windsor, NS and married his bride Byrne and had 3 children. They moved to Ontario where Vern was a welder and later became one of the first bus drivers for Mississauga transit.

Vern joined the Cooksville Branch of the Royal Canadian Legion in 1954 and was a proud and respected member for 56 yrs.

He was an active participant in all Legion Sports and represented the club at house, zone and district levels.

Vern will be missed for his comradeship, colourful jokes, and poetry.

The following is a poem written by him:

Cry Not for Me

Eagles soar in the midnight sky,

To search the great heaven’s high,

The mountains strong will wear away,

But life goes on as I leave today,

Cry not for me,

Life for me was fun and free I leave you now;

don’t cry for me.

Rest well our dear comrade Vern, you have served your country well and we owe you our gratitude for fighting for our freedom.